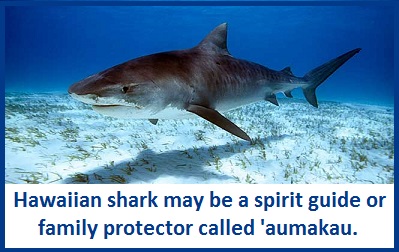 While spending a few days in Hawaii, I wanted to share some of the amazing stories that make the islands so rich with healing energy. Much of the following information about sharks as an ‘aumakua or spirit guide came from the Maui Magazine article written by Rita Goldman:

‘Aumakua abound in Hawaiian legends, and in stories local families have handed down through the years. These guardian spirits display miraculous powers, appearing in dreams to give warning or advice; assuming in waking life the shape of an animal, a plant, or an elemental form such as a cloud or ocean wave. Perhaps because of their fearsome nature, sharks are a frequent subject of these tales.  A shark spirit guide can show strength where needed and teach fearlessness.

Until recent times, a female shark named Ka‘ahupahau was said to live near the entrance to Pearl Harbor, with her brother, Kahi‘uka, “the Smiting Tail.” People of the region brought them food and scraped barnacles from their backs. In exchange, the two ‘aumakua kept Pearl Harbor free of man-eating sharks; sometimes Ka‘ahupahau would do so by transforming herself into a net that was nearly impossible to tear. Ka‘ahupahau resided at Pearl Harbor until the U.S. Navy built a dry dock over her home. In her collected Folktales of Hawai‘i, Mary Kawena Pukui recounts:

“Scarcely was it completed when, after years of labor, the structure fell with a crash. Today a floating dock is employed. Engineers say that there seem to be tremors of the earth at this point, which prevent any structure from resting upon the bottom, but Hawaiians believe that the Smiting Tail still guards the blue lagoon at Pearl Harbor.”

Who are we to doubt these legends or the energy that is often contributed to a shark ‘aumakua? 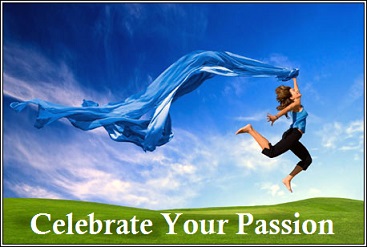 The root of the word passion is the Latin pati-”suffer.”  Sam Keen, Author and Philosopher, writes: ‘If we ignore our deepest passions, we will suffer…Those who honor their passions rarely get stuck in who they are now.  Instead, they begin to blossom into who they might be.’  Sam Keen was always passionate about flying which he equated the word trapeze with flying. Shortly after his 62nd birthday he started taking instructions on how to fly on a trapeze. This is a reminder, we are never too old to honor or celebrate our passion(s). 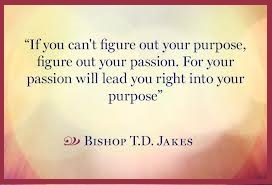 “Whenever people are totally caught up in their passion,

of their authentic self.

And this genuine essence, this authentic self, 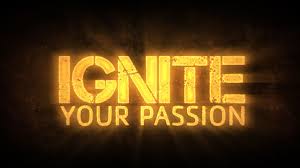 I celebrate my passion that makes me whole and honor all emerging passions in the future.

Pink Mangano Calcite possesses all the characteristics of Calcite and Maganese. It is a nurturing stone associated with the Heart Chakra that helps us take care of ourselves. It enables us to accept love and self-love.  This feminine energy of Mangano Calcite dissolves resistance and is used to help do the following: 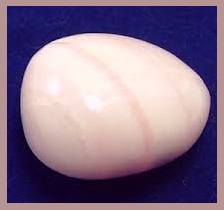 Release fear and grief from the past

Assist in developing self-worth and self-acceptance

Help those who have suffered trauma or abuse

Attitude: A state of mind or feeling; disposition; a general cast of mind 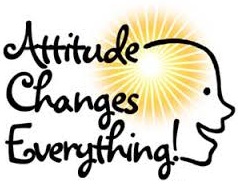 We constantly hear that a positive attitude is everything.  It is difficult to be positive, if suffering from a physical, emotional or spiritual disease. We can give ourselves permission to hope for positive attitudes that are gracious, kind, loving, upbeat, confident and forgiving.  However, acknowledging when we are feeling bitter, angry, melancholy, depressed, fearful, gloomy, or pessimistic is important for healing. 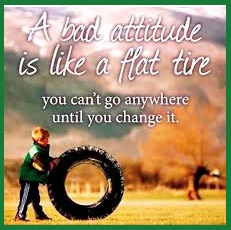 Attitude is everything.  Mae West lived into her eighties believing she was twenty, and it never occurred to her that her arithmetic was lousy. ( from: Soundings) 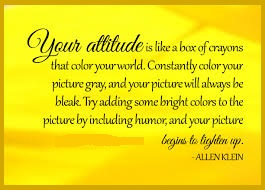 Attitude Affirmation: My williness to acknowledge all my attitudes help awaken me to my potential to heal my wounds. 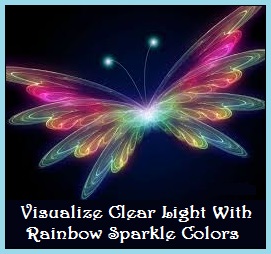 The first milestone goal for this blog has been reached by offering today’s #300 post honoring all women that continue to give us encouragement to find our own harmony & balance.  I have included several of my favorite quotes from famous women.  However, I could fill pages of the encouraging words we as women hear and offer to others everyday without having published books, painted pictures or have many degrees hanging on our wall.  We are all woman healers encouraging harmony and balance. 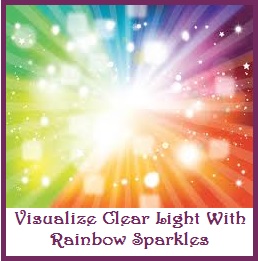 “Far away there in the sunshine are my highest aspirations. I may not reach them, but I can look up and see their beauty, believe in them, and try to follow where they lead.”  Louisa May Alcott (1832-1888), the author of Little Women

“Never be afraid to sit awhile and think.” Lorraine Hansberry (1930-1965), a playwright and painter.

“I fall, I stand still… I trudge on. I gain a little… I get more eager and climb higher and begin to see the widening horizon. Every struggle is a victory.”Hellen Keller (1880-1968), author and public speaker

Tess Whitehurst, in her book The Good Energy, gives us a quick visual exercise that will bring us an infusion of balance. Remember if you have difficulty visualizing, find a picture to look at such as the ones here in this post.  It helps to view them with eyes half closed in a relaxed stare for a few seconds, then close your eyes and allow the body to feel. 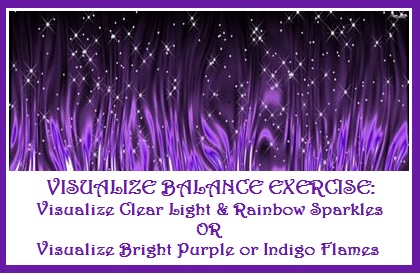 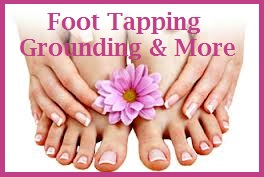 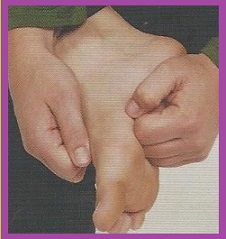 Ann Marie Chiasson, MD, has written a home study course called Energy Healing The Essentials of Self-Care.  Her Foot Tapping exercise is excellent for grounding your body.  The author also recommends foot tapping for restless leg syndrome, insomnia, and for foot or ankle injuries.  This is helpful for daily vitality because it opens your body up to energies coming through the legs and feet.

To prepare for this exercise:

• Sit in chair or on the floor with bare feet or with socks on feet.

• Tap all over one foot with hands (as shown top and bottom) for at least one or more minutes.

• Do the same tapping on the other foot for one minute or more.

This exercise is also included in some shamanic training because it helps to fully open up the body to the vibration of the earth. 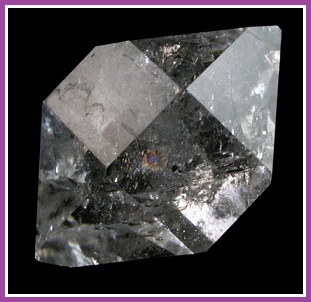 Herkimer Diamonds naturally form with 18 facets and are double terminated (points at both ends). They are not really diamonds but known as the most powerful variety of Quartz crystal (they are brighter and have a higher vibration) and are found only in the foothills and surrounding areas of Herkimer County, New York.

Being double terminated, they have the ability to not only transmit their own energies, but to receive spiritual energy and to amplify and focus it intently. These extremely clear crystals often have black inclusions which can be used for focusing on while meditating.  Some have water inclusions within them, which aid the healing of emotional problems. 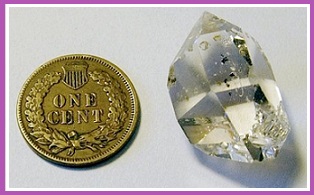 Clears the chakras, opening channels for spiritual energy to flow. Used especially for the heart, brow and crown chakras.

Also helpful with dream work, past life recall as well as meditation. 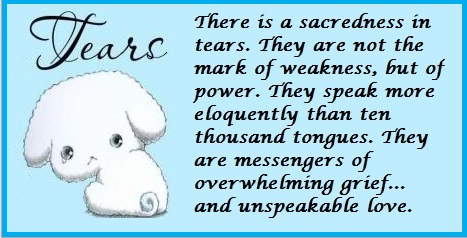 Author Jerry Bergman writes: “Tears are just one of many miracles which work so well and we take them for granted every day.” In his article The Miracle of Tears he wrote about the following seven ways tears and the phenomenon we call “crying” heal us physiologically, psychologically, and spiritually:

”What soap is for your body,

Tears are for the soul.” 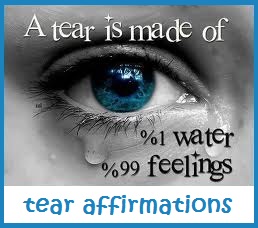 Today my tears will help open my heart.

Today my tears are for self-healing.

Today my tears will be a cleansing “good” cry. 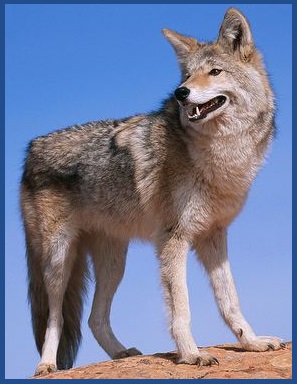 COYOTE AS AN ANIMAL SPIRIT GUIDE

Coyote is a teacher of hidden wisdom with a sense of humor. The smiling coyote is here to help you learn, un-learn and re-learn with humility, awareness, wonder, excitement, humor, play and joy.

Many Native American tribes view the symbolism of the Coyote as that of trickster, shape-shifter, and transformer.

When Coyote crosses your path: (This happened to me several days ago. After giving the sighting some thought, I realized there was a message for me.)
– Ease up, simplify, and laugh.
– Remain calm, stay poised, and adapt.
– Accept wisdom learned as a gift.

I am open to learning, un-learning and re-learning.

The energy of coyote lives within me, liberating my soul.

I see all that is good and available to me right now.