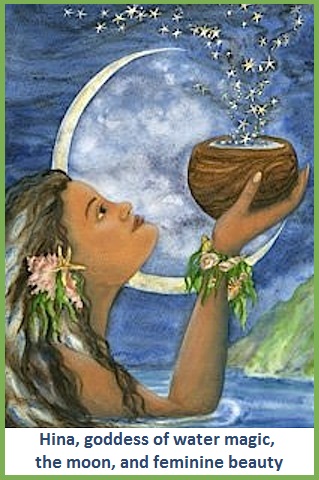 Serge Kahili King, Ph.D. shares in his article titled, Hawaiian Goddesses, the following: ”Hina seems to be the oldest goddess, for she is known all over the Pacific as Hina, Sina, or ‘Ina.  In many stories she is closely associated with the moon, the ocean, and female activities like tapa making, as well as healing. She has many, many different aspects and epithets covering a wide range of human activities. In the oldest stories she is variously the wife, sister, mother, or grandmother of Maui, and she has also been incorporated into newer religions as the wife of Kane or Ku…”

Tahitian Goddess, Hina,  is known as the Lady in the Moon who shines on us with her changing faces. As the dark moon, she presides over death. As the waxing moon, she is the creator who made people from clay and the moon her home. As the full moon, she embodies a mature woman’s warrior spirit. As the waning moon, She is the aging crone full of wisdom and insight.

During the next full moon, step outside, look up at the moon, and spend some intimate time with The Wise  Hina.  SEE WHAT HAPPENS!