“If women can be railroad workers in Russia, why can’t they fly in space?” ~ Valentina Tereshkova 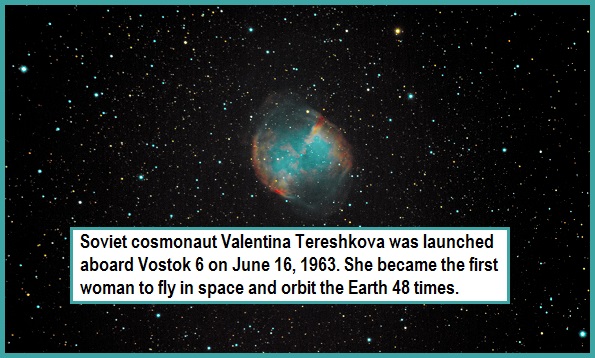 Valentina was born March 6, 1937, in Maslennikovo, Russia. She began work at a textile factory when she was 18, and at age 22 she made her first parachute jump under the auspices of a local aviation club. Her enthusiasm for skydiving brought her to the attention of the Soviet space program, which sought to put a woman in space in the early 1960s as a means of achieving another “space first” before the United States. As an accomplished parachutist, Tereshkova was well equipped to handle one of the most challenging procedures of a Vostok space flight: the mandatory ejection from the capsule at about 20,000 feet during reentry. In February 1962, she was selected along with three other woman parachutists and a female pilot to begin intensive training to become a cosmonaut.

During launch, Tereshkova shouted: “Hey sky, take off your hat! I’m coming to see you.” 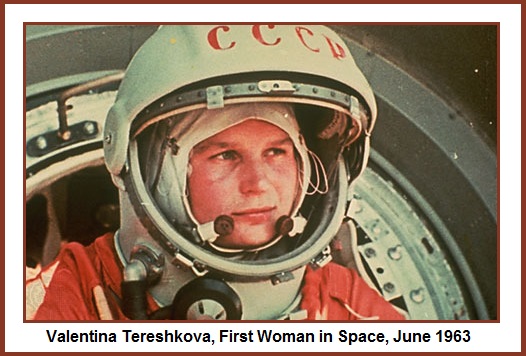 June 16, 1963, aboard Vostok 6,  26 year old, Valentina Tereshkova, becomes the first woman to travel into space. Although Tereshkova experienced both nausea and  physical discomfort for much of the flight, she orbited the earth 48 times and spent almost three days in space. With a single flight, she logged more flight time than the combined times of all American astronauts who had flown before that date. Tereshkova also maintained a flight log and took photographs of the horizon, which were later used to identify aerosol layers within the atmosphere.

“Once you’ve been in space, you appreciate how small and fragile the Earth is.”~Valentina Tereshkova 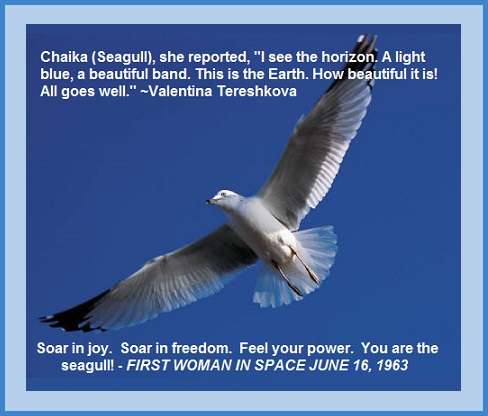 Tereshkova never flew in space again. She later became a test pilot and instructor and earned a doctorate in technical sciences.  She was honored with the title Hero of the Soviet Union. She received the Order of Lenin and the Gold Star Medal. She became a spokesperson for the Soviet Union and while fulfilling this role, she received the United Nations Gold Medal of Peace.  It would be almost 20 years before other women followed Valentina Tereshkova—(Seagull) in space.  Female astronauts/cosmonauts went on to become commonplace in the 1980s.   Now many women from different nationalities have worked in space.  Consider taking a moment to look up at the skies and honor the women that have gone into space, and those few that have given their lives while venturing into the unknown.  Thank you brave pioneers and adventurers representing all females across this amazing planet earth. 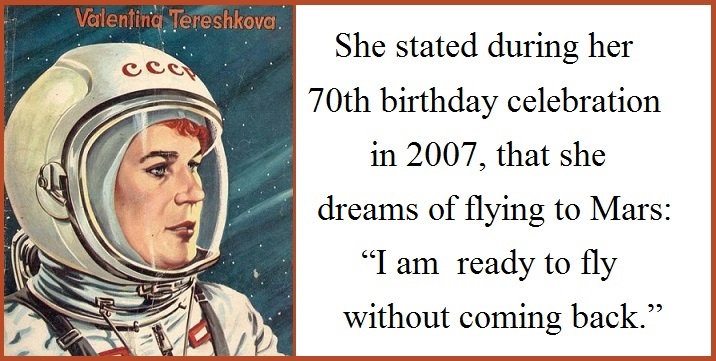