One of the most important roles that Oshun plays is that of the goddess of the sweet waters and the protective deity of the River named Oshun in Nigeria.  Alongside this river is a sacred grove, probably the last in Yoruba Culture, dedicated to Oshun.  Sometimes she is portrayed as a mermaid, with a beautiful tail of a fish (as seen above).

As a goddess of love, Oshun is depicted as a beautiful, charming and sensual young woman.  Although Oshun governs love and the sweet waters, she is also regarded as a highly benevolent deity.  She is said to be the protector of the poor and the mother of all orphans.  Oshun is regarded as a healer of the sick, the bringer of song, music and dance, as well as prosperity and fertility.  She is known to teach the art of divination using cowrie shells, as well as songs, chants and meditations taught to her by her father Obatala. 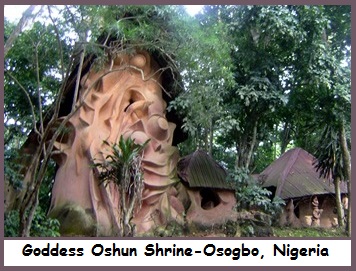 After researching this lovely African Goddess, I am wondering if visiting the following festival might need to be added to my bucket list. The festival of Oshun-Osgobo, which takes place every year in Osogbo, Nigeria, celebrates the goddess of fertility, Oshun. The festival renews the contract between humans and the divine. Oshun offers grace to the community; in return, it vows to honor her Sacred Grove. This ceremony is part of a rich indigenous Yoruba religious tradition that began in West Africa and has become one of the ten largest religions in the world, with upwards of 100 million practitioners.