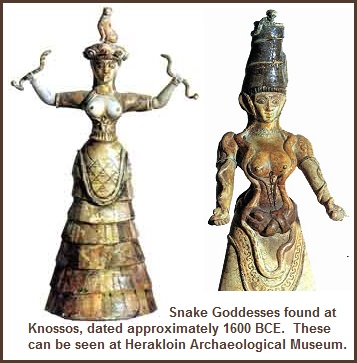 The first day of my Crete pilgrimage, Carol Christ, Ph.D, lectured and guided the group through the Minoan Civilization Section of the Heraklion Archaeological Museum.  We were then taken to our first Minoan Ruins to visit.  Knossos was undeniably the capital of Minoan Crete.

Knossos was inhabited for several thousand years, beginning with a neolithic settlement sometime in the seventh millennium BC, and was abandoned after its destruction in 1375 BC which marked the end of Minoan civilization.  The two famous faience (glazed ceramic) Snake Goddesses were found in the Knossos Ruins.  Snake Goddess had a broader function of Universal Mother or Earth Mother and was thereby principally a fertility deity.

The Phaistos Disc is an enigma and the most important artifact  found  in 1908, at Phaistos, the ancient Southern Crete Minoan Palace.   It is a circular clay disc inscribed with symbols stamped on both sides that are unlike any signs in any other writing system.  The disc is thought to date from around 1700 BC.  The text consists of 61 words, 16 of which are accompanied by a mysterious “slash” mark.  Currently, it has not been deciphered.

My favorite Sacred Center was the Palace of Malia.  The site was inhabited in the Neolithic and early Minoan period (6000- 2000 BC), but very little trace remain. The first Palace was built in 1900 BC and destroyed in 1700 BC when a new Palace was built. Following the fate of the other palaces in Crete, it was also destroyed in 1450 BC and the present ruins are mainly those of the new palace. The Palace of Malia is situated on the North coast of Crete, East of Heraklion. To the south lie the Lasithi Mountains.  Little is known of the Old Palace though some finds from this period attest to its wealth. 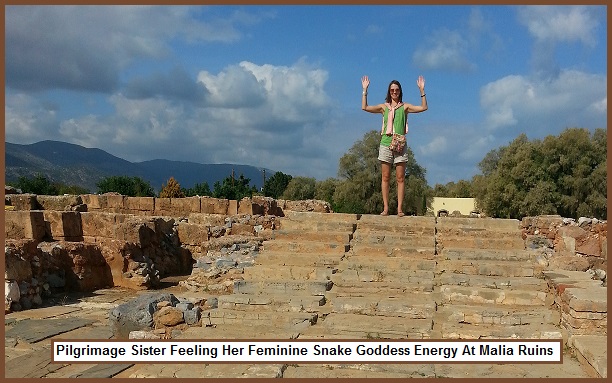 The Bees Pendant below is one of the most famous exhibits in the Heraklion Archaeological Museum.  It’s a very detailed representation of two bees carrying a drop of honey to their honeycomb. It was found in the Old Palace cemetery at Chrysolakkos, outside Malia Palace. Bees were very important in the Minoan, matriarchal civilization.  As a symbol of the Mother Goddess, bees represent mutual support and fertility.  The large Pitho Jar was another artifact found and is on Malia Ruins site.  These oversized jars were used for storage of foods, grains, olive oil, and possible wines. 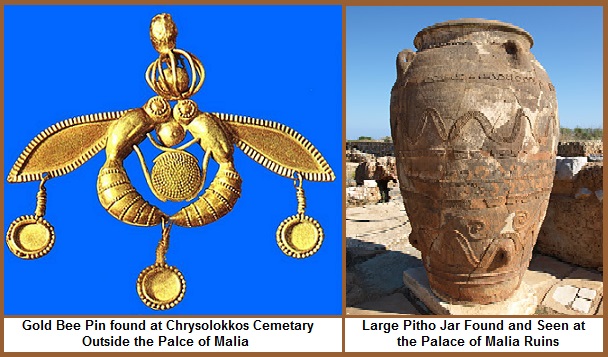 Walking on the grounds of these Sacred Centers was the most fulfilling feminine energy empowerment  I can truly remember. If you want to know more about the women’s Goddess Pilgrimage and the Minoan Culture, please check out www.goddessariadne.org.