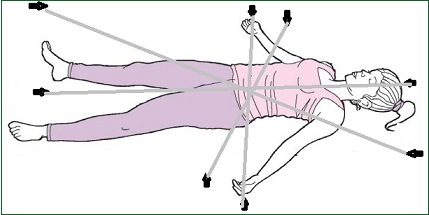 Create a strong energy connection to the earth and realign the body’s energies by using eight pieces of Black Tourmaline for an energy alignment layout. This energy net help tensions in bones and muscles relax and physical balance improve.  This connection to the earth is a prerequisite for effective grounding and protective support.  Energy net is also useful after travel because it can reduce effects of jetlag.

1.  Use a green cloth to lie on (white sheet for second choice).  It is best to have the layout where your head will be to the north.

2.  The eight Black Tourmalines will be aligned to the same imaginary point in the center of the body.  Put four tourmalines pointing inwards in a cross – one above the head aligned with one between the feet.  The other two on each side outside of arms midway down the body.

3.  Place the remaining four tourmalines as shown on the layout in the above picture so all are aligned and cross at the same point in the center of the body.

4.  Lie down and rest inside this cross-shaped energy pattern.  Remain in the energy net for five to ten minutes, then when you have removed the Black Tourmalines, spend at least 15 minutes resting before returning to normal activity.