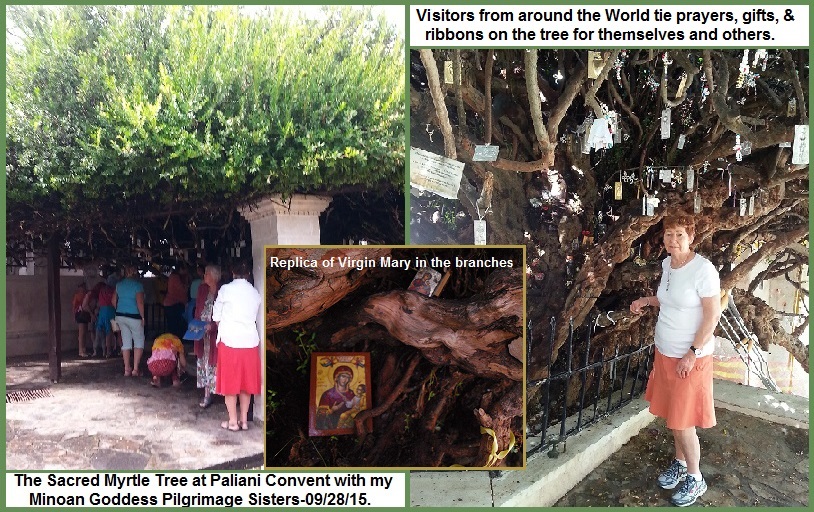 TREES seen on “The Goddess Pilgrimage to Crete with Carol P. Christ” (www.goddessariadne.org). This introduction to Minoan culture included a visit to the Paliani Convent, an old convent (from about 668 BCE), and the Sacred Myrtle Tree that is said to be over 1000 years old.  I have always loved the spirit of trees, and this one was magnificent. The story goes that after the Turkish invasion in 1821, the convent was destroyed, but an icon of the Virgin Mary was found in the tree. The nuns moved it into the church, but the next day it was found back in the tree. As many times as they tried to take it in, She made her way back to the Tree of Life. And so she has remained there, now entirely encompassed by the arms of the great tree (a smaller replica hangs on the branches for all to see).

The small village of Krasi, Crete, has one of the oldest trees worldwide. Due to the free running water, the area is covered with walnut trees, plane trees and all kinds of vegetation. Next to the spring in the middle of the village is this beautiful estimated 2,000 year old Plane Tree in all its glory.  The root has a circumference of 22 meters!  We circled the tree and invited others to join us celebrating nature’s miracle. 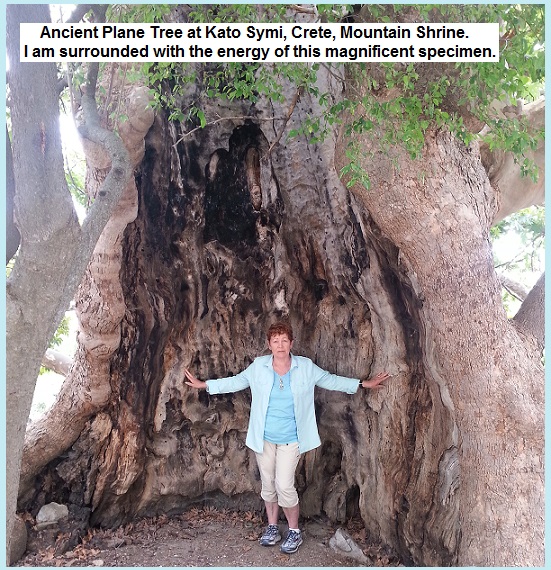 This enormous tree was a huge surprise.  On one side it was another giant plane tree near the Kato Symi Mountain Shrine. I was immediately drawn to this tree but wasn’t able to spend time with it because we were here for a purpose. We were driven in pickups near the top of the mountain and allowed in through a locked gate to one of the sites we honored and performed a simple symbolic ritual such as pouring honey, wine, milk, or olive oil, as women did on the Minoan Goddess Alters. At this ritual we were also each reading a poem, written by Sappho, a female Greek lyric poet, born sometime between 630 and 612 BCE.  It wasn’t until slipping back through the raggedy wire gate that I saw the opposite side of the tree I admired.  Here was the gutted shell caused by fire, yet this tree continued to live and give life to new branches.  Wrapped inside almost the womb of this giant tree, I felt the overwhelming importance of nature’s energy for my well-being.   I LOVED HUGGING AND BEING HUGGED BY THE TREES ON CRETE!