Meryl Streep has continued her battle towards achieving equal rights for women by writing a letter to every single member of Congress demanding they “stand up for equality”.  The Oscar ­winning actress’ letter urged Congress to revive the Equal Rights Amendment (ERA), which was written in 1920, passed by Congress in 1972 and ratified by 35 states.  However, it fell short of the 38 needed in order for it to be enshrined in the Constitution and has lain dormant ever since.

The proposed amendment states: “Equality of rights under the law shall not be denied or  abridged by the United States or by any State on account of sex.” 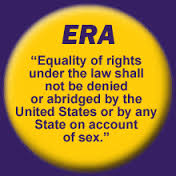 Here is the contents of  Meryl Streep’s letter printed by the Associated Press: “I am writing to ask you to stand up for equality – for your mother, your daughter, your sister, your wife or yourself – by actively supporting the Equal Rights Amendment.  A whole new generation of women and girls are talking about equality – equal pay, equal protection from sexual assault, equal rights.”
Please all empowered women  follow Meryl Streep’s lead.  Write Congress members requesting that the Equal Rights Amendment (ERA) be ratified, making it part of our Constitution honoring everyone.

FYI, the Equal Rights Amendment was passed by Congress on March 22, 1972 and sent to the states for ratification by both houses of their state legislatures.  A proposed amendment becomes part of the Constitution when approved by three-fourths (38) of the 50 states.  During the next five years, 35 states approved the amendment.  By the Congressionally imposed deadline of June 30, 1982, however, no additional states had voted yes, and the ERA fell three states short of ratification.  The 15 states that have not yet ratified the Equal Rights Amendment are Alabama, Arizona, Arkansas, Florida, Georgia, Illinois, Louisiana, Mississippi, Missouri, Nevada, North Carolina, Oklahoma, South Carolina, Utah, and Virginia.