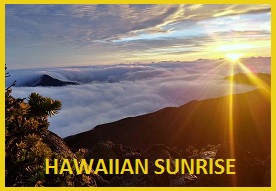 Significance of Oli (Chants) in Hawaiian Society is that the vibration of the word has the same frequency as what is being spoken of at the deepest level of the chant. The ancient languages including Hawaiian, Indian (Sanskrit), Greek, Latin, and Hebrew all have this effect. English does not. When chanting, we can expand our neurology and attune it to spirit & our consciousness. The following is a simple Hawaiian chant practiced before sunrise:

Key to pronouncing Hawaiian vowels as in Spanish: